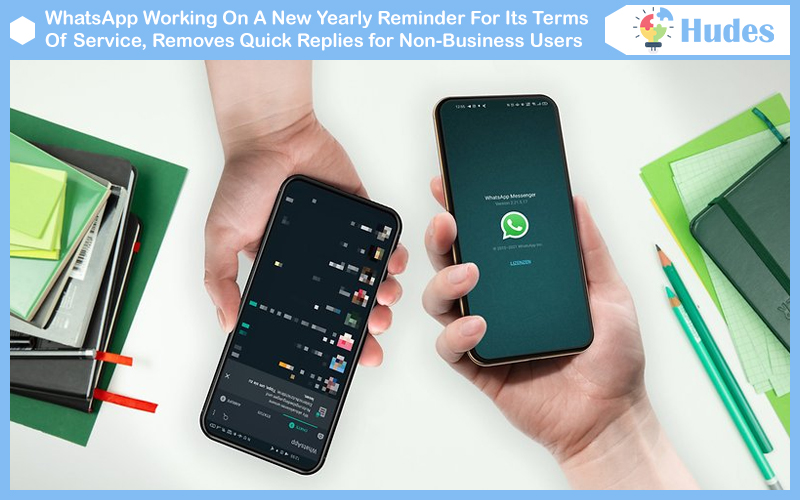 WhatsApp is currently working on a new yearly Terms of Service reminder feature. The Meta-operated messaging app is reported to work on an entry in the app’s settings menu. This was discovered by WABetaInfo on the latest beta version of the app.

However, WhatsApp itself hasn’t revealed anything related to their plans yet. Meanwhile, the app has disabled Quick Replies for non-business accounts on the latest desktop beta version of the app. This feature was previously included for regular account holders.

This new feature is currently under development and is not visible on the app for all users.

According to WABetaInfo, tapping the ‘Yearly reminder of our Terms of Service’ option will redirect users to a specific Terms of Service page in the app. This will be visible only to users in India, to comply with the IT Rules of the country.

WhatsApp is yet to disclose any plans related to adding a shortcut to their new entry for India-based users.

The messaging app created a big controversy last year when the company decided to disclose its plans to update its terms in January 2021. This included changes associated with messages businesses on WhatsApp.

Based on another report by WABetaInfo, the Meta-owned messaging app is working on reverting a change that allowed non-business WhatsApp users to access the Quick Reply feature.

Quick Replies is a useful feature that is available for WhatsApp business users as it helps them save certain replies and use keyboard shortcuts to reply to users on WhatsApp Desktop.

However, this feature was also available to regular users on a recent WhatsApp Desktop version. But now WhatsApp has disabled this feature for regular accounts on the latest desktop beta version of the app.

WhatsApp is yet to reveal anything yet. Whatever information we have right now is based on reports by WABetaInfo.

WhatsApp is an extremely popular messaging platform that is used by billions of people across the world. It is now owned and operated by Meta, previously known as Facebook.